Consistency does not mean identical features on every touch point

For stakeholders the consistency of a service usually means identical features on every device. Therefore removing features on certain touch points is something they hardly want to consider. However, research has shown that users do not do the same thing on their mobile device as they do on their laptop. They want a consistent look and feel but not necessarily the same features. If stakeholders insist on the exact same features on every device, results are inevitably a poor user experience. If they accept to adapt features for each device, as I am going to present it below, they will set the bases for a good UX experience.

I attended lots of meetings during which marketing teams would complain when the roadmap of the next release was only about fixing some users scenarios, and improving the user experience. UX milestones would lead to comments like "I will have nothing new to sale this quarter". However the fact is: designing a good app is not about adding features. It is about making choices in order to deliver the right features at the right moment in the right way. If users enjoy using an app more, they will be more willing to keep using it. Increase of the users retention is a direct benefit. Less is more.

Build on top of the device's experience

Android users are not iOS users. Those two systems offer different frames inside which apps are built. An android user expects the long tap gesture to select an item. An iOS user will expect the swipe left on a list item to open an action menu. Actions that are easy on one device can be very hard to perform on another one. A TV user can only use up - down - left - right commands on his remote control.This makes navigation a different experience, and therefore a challenge to designers.

It is mandatory to know all the ins and outs of each device and each system is mandatory to be able to design good products for each of them. Following systems recommendations and gestures is the best way to go. Not redesigning some common elements of the general interface is also a big plus: when the system is updated for a complete new one (remember how disruptive iOS 7 felt), your app does not suddenly look outdated.

A good design strategy for an app like Orange's Cloud:
prioritize and adapt features to devices and context of use 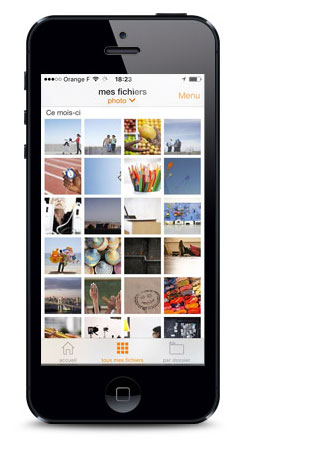 Cloud users are mainly interested in features like automatic sync (whenever they take a new picture, they might want it to be automatically saved), but with particular attention to their data use. Being able to select automatic synchronisations is a must, as long as you can also decide to only do it when you have wifi access.

Research shows that mobile devices are mainly used to produce and access media files (photos, videos and music). Should we then decide to initially only show those files (and give an option to browse through other types of files)?

Further samples of the endless list of questions designers and developers had to work on were:
How to garantee an experience without interruption when the user loses network?
How can we secure the app running in the background without draining the battery?
Which screen should be blocked in vertical orientation to help browsing?
Which screen should be available in both orientations? 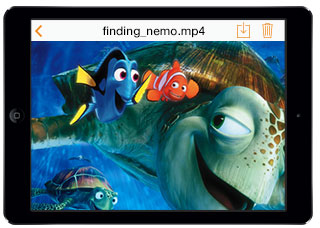 Cloud users use their tablets mainly to organise their files and data since the tablet's screen size is more convenient for those activities. Users mainly do this at home, or at least in an environement offering wifi connection.

Nevertheless, the tablet app should not neglect questions related to the network use in mobility: suppose you are taking your tablet to watch a video during your 2 hours train trip. Wifi network inside trains is usually weak and unstable. The Cloud app should garantee that your video can be available when you are offline, and that the download time from your Cloud to your device is fast (even though your original video file is a heavy HD one). 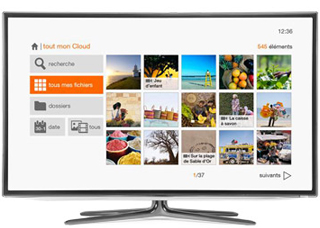 Research shows that Cloud users make extensive use of their music through the TV app. That was a big surprise for the team. For that device, a specific music player has been added to the interface. Also a slide show feature, combining pictures and music, was being studied.

The biggest challenge when designing for a TV interface is UI and interaction: because a remote control offers limited moves (left - right - up - down) and because the user is at such a distance. Designing a good experience on TV screens demands special attention to interface and interaction. For instance, navigation items need to be big enough, placed inside a restricted screen safe zone that avoids edges of the screen. The use of large space around them is mandatory. And the focused item has to stand out clearly, using effects that are not color based only, because the color spectrum on a TV can be faulty.

on desktop and web 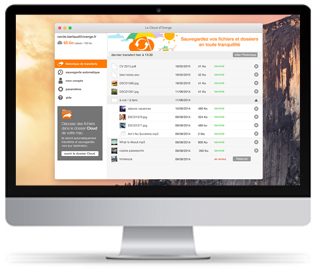 On desktop, Cloud users expect automation for the backup of their files. Uploads are often mass uploads. The selection of files to place in the cloud has been improved, enabling drag and drop from the desktop finder to the app. The "transfer view" has been redesigned to give to users a clear overview of the process, file by file, and in total. Pausing / restarting uploads are features that have been added for better control.

We explored new ways of searching within files in the Cloud folder, using files metadata or content: GPS coordinates, face recognition, picture orientation or colors. Keeping user research up to date with trends, evolution in users habits and prototyping with the R&D department to run large scale tests within real conditions is a good way to keep improving a product for its millions of users.

I am based in Amsterdam.
I also spend time in Paris and in Aix-en-Provence.

Do you need me for a talk, a training, a project or a job?
Download my resume and drop me a line!